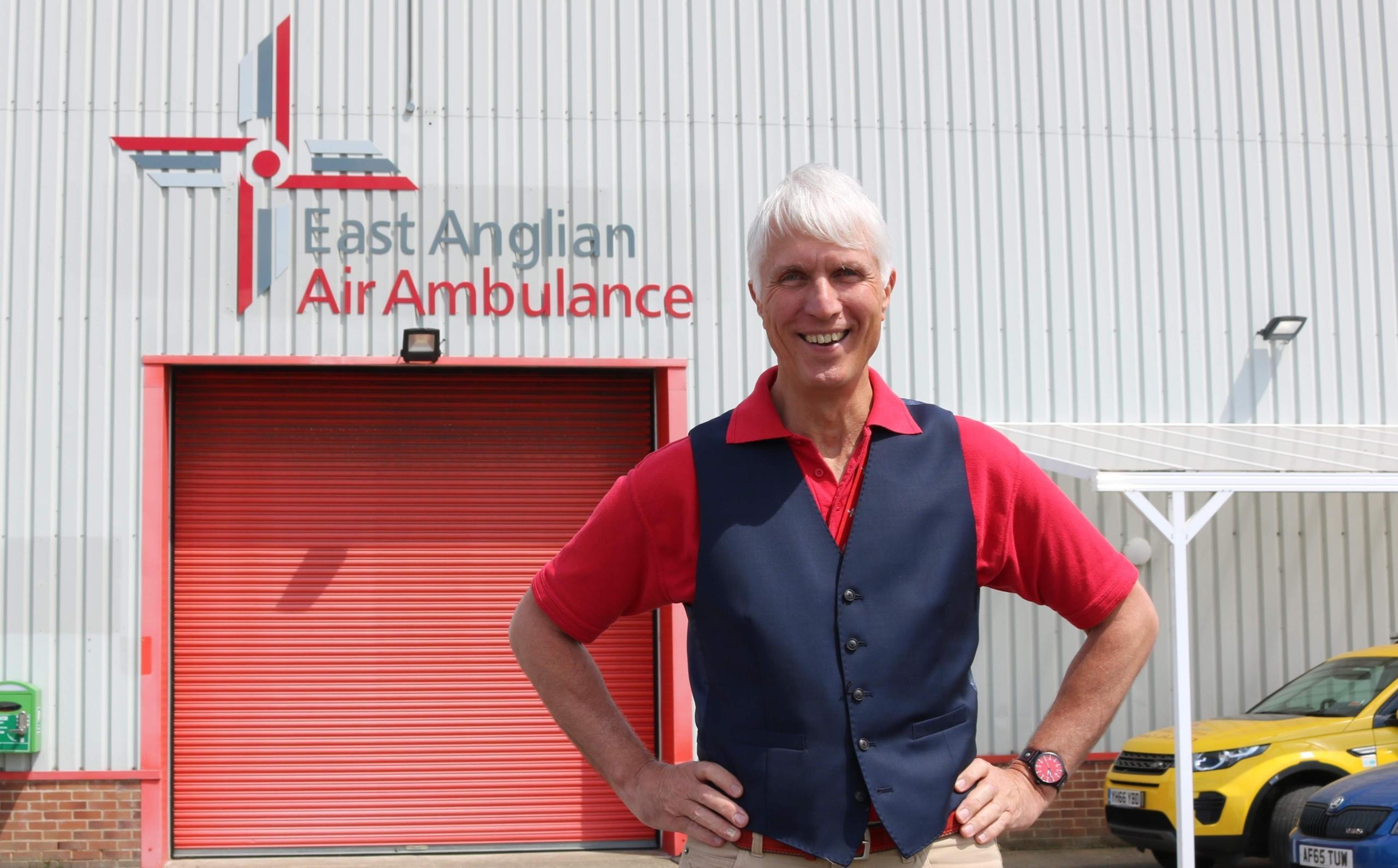 East Anglian Air Ambulance (EAAA) has announced today (6 April) that its CEO, Patrick Peal, will be retiring from the charity in June after seven years in the role. EAAA’s Director of Operations Matthew Jones has been appointed as Patrick’s successor and will take the reins at the end of June.

Patrick played an integral part in setting up the life-saving charity just over 20 years ago, led the charity as a former Trustee for some eleven years and has been the charity’s CEO since 2014. In that time, the charity has undergone a huge transformation and growth period in terms of fundraising income, operational achievements and becoming a top-rated local employer.

During Patrick Peal’s tenure, the service has expanded to cover 24 hours a day every day of the year. To date, this has involved flying by day and by night, with the middle of the night covered by rapid response vehicles. His final act at EAAA in the summer will be extending the flying service 24/7.

A major focus for his work has been the creation and nurturing of a fantastic team. From the frontline teams to the ground staff, everyone plays an important part in the charity’s mission and future. EAAA was named Best Employer in the Norfolk Business Awards in November and has been ranked in the top ten not-for-profit companies to work for by the Sunday Times.

A key enabler for the medical operation and for the performance of the charity has been the creation of new operational bases at Cambridge Airport and Norwich Airport; the latter – which includes the EAAA headquarters – completed this year.  The EAAA service has also been extended to include an aftercare service for patients, first aid training for the public, and operational research.

All of this has been done with the financial support of the communities and businesses in Norfolk, Suffolk, Bedfordshire and Cambridgeshire.

The charity being a cause very close to his heart, Patrick said: “Being CEO of East Anglian Air Ambulance is the best job I’ve ever had, but all good things must come to an end eventually. The charity is approaching an exciting new era of 24/7 helicopter operations and now is the right time for me personally to step back and let someone else lead EAAA into what I’m sure will be a very exciting future.

“I have achieved everything that I set out to as CEO seven years ago and couldn’t be prouder of the organisation as it stands today. It has an amazing culture of fun and high-performance, and everything is always geared towards providing the very best patient outcomes and value for money.

“Despite significant impacts of the pandemic on operations and fundraising over the last year, EAAA has weathered the storm brilliantly and continues to push ahead with key projects, such as starting to fly 24/7 this summer and moving into our new Norwich base. I’m really proud to have seen all the years of planning come together over the last few months into a truly spectacular, world-class facility in Norwich. The teamwork and progress at EAAA, despite recent challenges, has been beyond fantastic. I am delighted that Matthew Jones will be succeeding me as CEO and have every confidence that the charity will continue to go from strength to strength in his very capable hands.”

Patrick has lived and worked in Norfolk most of his life and has long been passionate about the need for an air ambulance service in the county. In 1996 he was part of initial conversations about setting up an air ambulance service in Norfolk and was instrumental in the charity’s official creation in September 2000. Patrick has held various board positions within the charity over the years and took up the CEO role in 2014. Prior to that he was Deputy Chairman of the Board of Trustees at EAAA and owner and Director of Tribe PR. In 2019, Patrick won Third Sector Director of the Year at the Institute of Directors East of England awards for his accomplishments at EAAA.

Patrick continued: “I’m extremely lucky that I’ve been involved with the charity from the very beginning and the transformation I’ve seen in what this charity can do for our patients really is outstanding. EAAA simply wouldn’t exist without the fantastic support of the local community and that is something that I’ve always been keen to remember and advocate to the rest of the team.

“When I took on the role of CEO seven years ago EAAA was attending about 1,700 missions a year and raising £8 million annually. I’m proud to say both of these areas have significantly increased, by about 60%, with 2,700 missions attended in 2019 and over £14 million raised in the same year. That’s a huge testament to the community that keeps this charity flying and I’m really excited to see how EAAA continues to progress in order to help the East Anglian community even more.”

Matthew Jones, Director of Operations who will replace Patrick as CEO, added: “It’s a huge honour to be offered the opportunity to lead this fantastic organisation into the future and I will do my very best to carry on the remarkable work that Patrick has started. Patrick has been an enormous part of getting this charity to where it is today and it is extremely humbling to be entrusted with this role. My first focus will be on implementing 24/7 operations from our new base in Norwich, a long-term goal of the charity’s which will make a huge difference to the type of service we’re able to provide at night.”

The Chairman, Sir William Cubitt, says:  “It is with great sadness that we say goodbye to Patrick Peal this year.  He has lived and breathed EAAA for much of the last 20 years and is rightly credited with its great success over that time.  The charity has benefited hugely from his ambitious vision, dynamism and charisma which has brought such a professional lifesaving operation to East Anglia.  He has set the charity up well for the future and we very much look forward to the next stage of its story under the capable leadership of Matthew Jones who is already well known to the charity, and the charity to him.”

Heather Benjamin, Chair of Air Ambulances UK, added:  “Patrick has been an incredible advocate of the air ambulance sector during his time as CEO of EAAA, having been a key driver in the merger between Air Ambulances UK and the previous trade body the Association of Air Ambulances of which he was Chair. His tenacious dedication to continuously advancing patient care through research and data whilst ensuring the wellbeing for crews will lead to improved collective standards across the sector.

On a personal note I would like to record my thanks to Patrick for his support over the last year as we navigated the Covid-19 pandemic whilst evolving the national organisation. We would like to wish him the best for his retirement.”

For more information about the work of EAAA, go to www.eaaa.org.uk