A new clinical trial begins tomorrow [Dec 15], with Air Ambulance crews carrying ‘whole blood’ instead of separate red blood cells and plasma for the treatment of severely injured patients at risk of bleeding to death.

The SWIFT (1) trial is led by NHS Blood and Transplant and will involve 10 air ambulance charities across the country in partnership with the Ministry of Defence and Air Ambulances UK.

If the trial shows patient benefit, it could reduce trauma deaths in civilian accidents and also on the battlefield, and in any situation where delaying a transfusion by seconds or minutes could be critical.

Air Ambulances have carried red blood cells since 2012. However during the SWIFT trial they will also carry ‘whole blood’. This is blood as it taken from the arm of a donor. It includes all the different blood components together, such as red blood cells, plasma, and platelets (2). Previous studies, including on military casualties in Afghanistan, have indicated whole blood could have better outcomes for trauma patients, including a greater chance of survival.

Whole blood may work better because it contains platelets. Platelets are the cell fragments which help the blood to clot.   Platelets are difficult to store – they have a short five-day shelf life, must be stored between 20C and 24C, and need constant gentle movement to help them stay oxygenated – so they are very difficult to use outside of hospitals. Currently, Air Ambulance patients, and soldiers needing battlefield transfusions, can receive plasma and red blood cells – but not platelets.

Additionally, carrying and transfusing one blood product could also be lighter and simpler. It could enable faster treatment, at a time when every minute counts. And it could make the transfusion process easier and reduce risk, a crucial benefit in difficult and fast-moving incidents.

There is already past evidence that whole blood could lead to reduced mortality and reduce the amount of blood needed after patients arrive at hospital. (3) However only a full randomised controlled trial such as SWIFT can provide the definitive answers.

All of the blood used will come from group O Rh negative donors. This is the ‘universal donor’ blood type which is vital in emergency trauma care, when there is not time to check the patient’s blood type before transfusion is started. 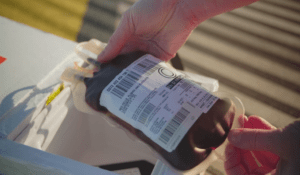 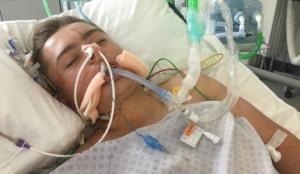 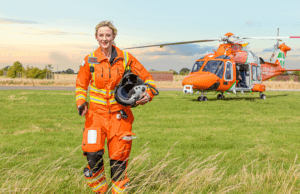 Over a two-year period, SWIFT will recruit 848 patients. One group of patients will continue to be given transfusions of red blood cells and plasma separately, with platelets given if needed after arrival at hospital. The other group of patients will receive transfusions of whole blood. The trial will compare survival and the amount of blood needed over the first 24 hours after injury.

Further improving trauma care would be of major importance. Major trauma kills more than 5,400 people every year in the UK. Pre-hospital red blood cell transfusions already save lives, with studies in military and civilian settings reporting a 12-14% absolute reduction in 30-day mortality. (4) This trial could enable a further reduction in mortality.

Dr Laura Green, co-chief investigator for SWIFT and Consultant in Haemostasis and Transfusion Medicine at NHS Blood and Transplant, said: “The role of air ambulances in providing blood transfusions at the scene of an incident is crucial – delivering the most challenging treatments in the most challenging environments.

“Any delay to starting transfusion during traumatic blood loss can reduce the chances of survival. We hope that SWIFT will show there are logistical and procedural benefits in giving a blood transfusion of all of the components in a single bag – and ultimately improved outcomes for patients.

“We are grateful to be working in partnership with air ambulance organisations and the Defence Medical Services to drive innovation and provide even better care to critical patients. We are also incredibly grateful to our O Rh negative donors, whose universal donor blood is critical in trauma transfusion – including in this trial.”

Professor Jason Smith, co-chief investigator, and Defence Professor of Emergency Medicine for the Defence Medical Services, Ministry of Defence, said: “We have known that blood transfusions save lives in patients with life-threatening haemorrhage for over 100 years, but the exact nature and optimal timing of those transfusions is still not known. This study will hopefully give us the answer as to whether whole blood is better than our current standard care in terms of clinical and cost effectiveness.

“Whole blood contains platelets. The only way to transfuse platelets in the pre-hospital setting is through whole blood. There is evidence there may be a benefit to giving patients platelets as close as possible to the point of injury.”

Simmy Akhtar, Air Ambulances UK CEO said “We’re proud to support the SWIFT trial in collaboration with NHS Blood and Transplant and the Defence Medical Services. A number of air ambulance charities across the UK are directly involved with this trial and like them our vision aligns with the SWIFT trial, that together we will ensure the best possible chance of survival and patient outcome for everyone in need of lifesaving pre-hospital care. Air ambulance crews are continually striving to provide the highest level of patient care and we hope the results will ultimately improve trauma care.”

Minister for Primary Care and Public Health Neil O’Brien said: “This vital trial could ultimately help save the lives of both patients at home and those defending us in conflicts abroad and shows what can be achieved when we all work together. Thank you to the team at NHS Blood and Transplant, the 10 pioneering air ambulance charities and the hundreds of trial participants across the country who will be taking part.  I also want to take this opportunity to remind people of the importance of donating blood – more appointments are becoming available over Christmas and New Year and I urge existing donors to continue to book in.”

He suffered liver damage and lost around six units of blood after being in collision with a van while riding his bike in June 2019.

The Air Ambulance team said they had no doubt that without this Ollie would not have survived. He was taken to Southmead Major Trauma Unit in Bristol where he spent weeks in intensive care. Ollie, now aged 19, is well and works as a trainee manager.

Mum Rachel James, 47, of St Braivels, near Chepstow in Gloucestershire, said: “He was urgently given all the blood products they carried.

“Ollie has always been aware and that he is here today due to the blood and plasma provided by generous donors and the amazing team that worked on him. Every minute counted.

“I really hope the new trial will work and that more lives can continue to be saved through using whole blood transfusions.”

Dance the night away whilst raising money for Essex & Herts Air Ambula...