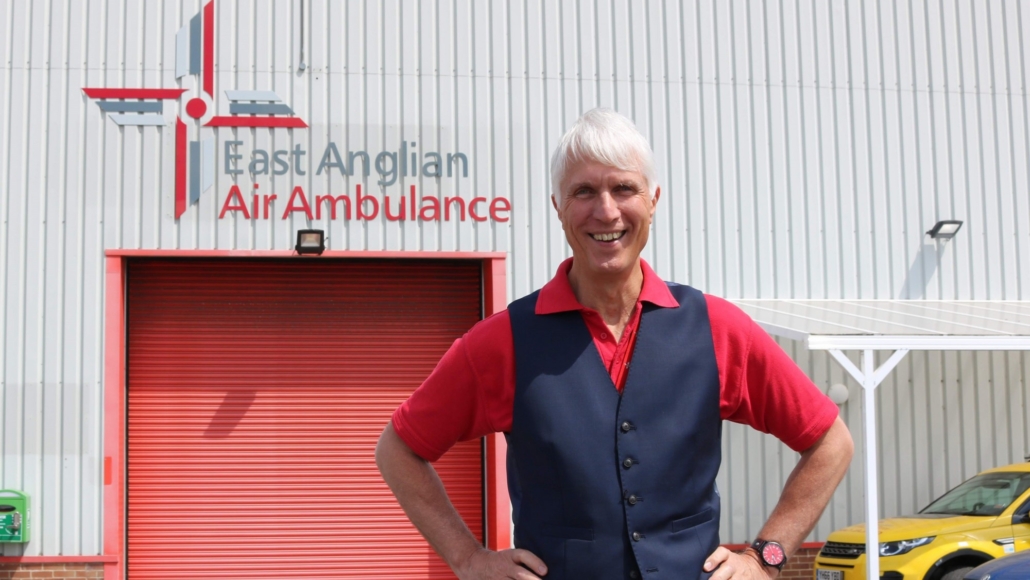 Patrick Peal (68), has been awarded an MBE (Member of the Order of the British Empire) in Her Majesty the Queen’s Birthday Honours List. The honour is in recognition of his visionary approach and commitment to both regional and national air ambulance services over the past 21 years. He will receive his MBE from a senior member of the Royal Family at an investiture at Buckingham Palace in due course.

Patrick helped to turn EAAA from its infancy, with just one helicopter in use once a week, to a fully-fledged helicopter emergency medical service (HEMS) flying 24 hours a day, seven days a week.

To date the East Anglian Air Ambulance charity (EAAA) has completed 33,549 life-saving missions since it started 22 years ago, supporting thousands of people across East Anglia.  More than 100,000 patients and their loved ones have benefitted and millions of pounds have been raised to support the charity since its conception.

“Receiving this accolade is humbling. EAAA wouldn’t be held in such high regard and give so much back to the community if it weren’t for the hard work and dedication from each and every member of the team, so I feel this award is a tribute to all our staff, volunteers, supporters and patients too.

“From front line doctors, paramedics, and pilots, to the ground staff working, we have achieved great things together, by committing, sharing the same vision, and respecting one another.”

Patrick’s legacy to air ambulance services in East Anglia and across the UK is immeasurable, putting in place an infrastructure to support growth and expansion for years to come.

“Air ambulance services save lives. The more we can do to support them to fly and have the resources they need, the more lives they can save. I have had the honour of playing a part in this, along with my colleagues who, like me are determined to keep our incredible teams in the air.”

Patrick’s dedication to EAAA has seen the launch of a range of game-changing services for the East Anglian community. From enabling 24/7 delivery of HEMS (Helicopter Emergency Medical Services), vital aftercare support services, and the provision of basic life-saving training for the community.

As CEO, Patrick’s leadership and focus on culture resulted in award wins as the best employer in the region,  on several occasions, as well as being voted the best charity to work for in the UK in the Best Companies list.

‘‘Turning the organisation around when I began as CEO was signalled by turning the hierarchy on its head. Listening to the people throughout the organisation to understand their needs and insights. We could then support, nurture and help everyone to thrive and therefore grow the capability of the organisation.

“At the heart of the culture change, while authority lines remained,  no matter the role, everyone deserved and gave the same level of respect as the next person. We now attract professionals who feel passionate about the mission and culture of this charity. Matthew and his team continue to serve them by providing a great place to work and flourish.”

Although Patrick has officially retired from the role of CEO of the charity, he remains very active as a volunteer.

Bill Sivewright, CEO of Dorset and Somerset Air Ambulance pays thanks to volunteers...
Scroll to top