A partnership with Air Ambulances UK places your organisation, brand, employees and customers, or philanthropic aims, at the forefront of one of the nation’s most recognised, trusted and respected lifesaving services

By partnering with us you will be helping the UK’s air ambulance charities to collectively make around 30,000 lifesaving missions a year. Your support also helps to fund continuous clinical and operational innovation and development. This means even more lives can be saved today, tomorrow and into the future.

Air ambulance charity lifesaving missions are funded by your donations

Thanks to our national partnerships with organisations, Government LIBOR fines and grants and generous donations from major donors, Air Ambulances UK has so far raised nearly £12,000,000 to support the lifesaving work of air ambulance charities right across the UK

From saving the lives of unborn babies, infants, children and teenagers to adults and the elderly, our partnerships aim to ensure air ambulance charities can continue to provide a world-class service now and in the future.

Partnerships present and past include some of the UK’s highest profile organisations, among them Allianz, Unipart Logistics, Costcutter, Roadchef, B&M and the Valuation Office Agency.

Find out more about all our partnerships below.

Give the gift of a Lifetime

Leaving a gift in your Will to Air Ambulances UK, no matter how big or small, can make a real difference to the lifesaving work of air ambulances. Your gift will allow us to continue our work in supporting the UK’s lifesaving air ambulances for generations to come.

Ways to get involved

Charity of the Year

All our partnerships are mutually beneficial

Missions just like the one to Sacha who was on a school trip to Richmond Park when a falling tree branch, weighing over 300kg, fell from a tree crushing him. Sacha suffered severe head injuries and broke his leg, arms, pelvis, back and five of his ribs

With thanks to London’s Air Ambulance, Sacha and his parents for sharing their story. 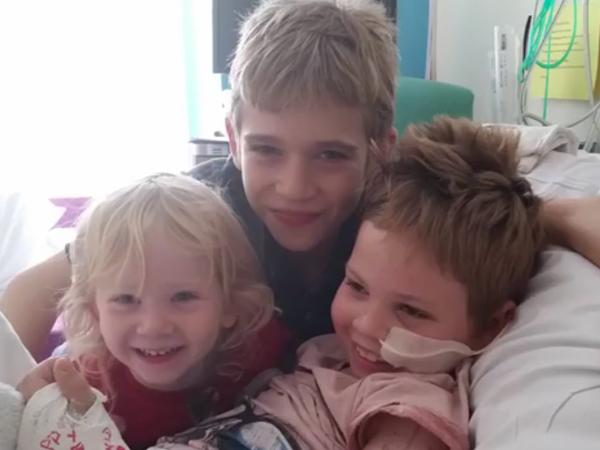 A lifesaving mission for Sacha

Our top five reasons to become a partner

Some of the lifesaving mission equipment you can help fund

* All values are approximate and will differ between individual charities A partnership between Unipart Logistics and Air Ambulances UK has now raised a total of over £45,000 thanks to a team of six Unipart colleagues recently completing a gruelling 450km cycle ride between two air ambulance charity airbases.

The partnership came about as a result of a lifesaving mission to Unipart’s Chief Commercial Officer, Claire Walters, who was critically injured in a cycling accident in Cornwall in 2019.  Claire was in collision with a car while cycling which left her unconscious and critically injured with a collapsed lung, fractured skull, broken ribs, collarbone and vertebra, a dislocated knee and facial injuries.

In November 2019, following a gruelling period of rehabilitation, Claire and a team of colleagues remarkably completed the Thames 100, a four-day 100 mile walk from the source of the River Thames in Gloucestershire to the Thames Barrier in London in November 2019, raising over £23,500 in the process.

Our national partnership with Allianz has been a great example of how a relationship between a regional office and local charity can grow into a UK-wide relationship. Originating between the Allianz Bristol office and Great Western Air Ambulance Charity, the nationwide partnership linked all Allianz offices to the nearest air ambulance charity, with all enjoying a wide range of fundraising activities from aerial-themed challenges to office dress down days and quiz nights through to payroll giving and has beaten its £1,000,000 fundraising target.

This is undoubtedly one of the most rewarding charity partnerships we’ve ever had. To learn about the amazing work of the air ambulances and the lives of those they’ve saved really resonated with our colleagues. Everyone has been incredibly motivated to get involved, leading to some of the best events we’ve ever undertaken and we’ve benefited so much from the opportunity to meet clinicians and leaders in the industry. It’s been exactly the right match for us and has really helped cement our brand values in the minds of our customers.” Air Ambulances UK is delighted to be one of the nominated charities to benefit from the Costcutter Penny Per Pack campaign.

Air Ambulances UK was unanimously voted Charity of the Year 2018 by Valuation Office Agency staff after an employee was critically injured in a motorbike accident last year. His life was saved by an air ambulance charity and our partnership aims to help ensure that this life-saving service can be there for anyone, anywhere at any time throughout the UK. The announcement means that Virgin Red members can choose to donate one thousand Virgin Points or more to Air Ambulances UK at the click of a button, helping air ambulance charities to save more lives and improve patient outcomes through rapidly delivering advanced lifesaving pre-hospital care.

Virgin Red is a rewards programme that allows members to earn and spend across five different reward categories, including Points for Good.  You don’t have to be an existing Virgin customer; anyone can sign up and start earning and spending Virgin Points across the Virgin Group and beyond to support charities such as Air Ambulances UK through Points for Good.

“We are thrilled to welcome Air Ambulances UK into our Points for Good category at Virgin Red. The charity will be instantly recognisable with our members who can now donate the Virgin Points they have earned on their everyday spending with us.  We hope that being part of the Virgin Red family will continue to raise awareness and donations to support the crucial lifesaving service air ambulances provide across the UK – a service that any one of us could need at any time.”

“We are incredibly excited to be part of the Virgin Red family and give customers the opportunity to support air ambulance lifesaving missions by donating their Virgin Points.  Air ambulance charities are collectively dispatched to around 80 lifesaving missions each day across the UK, delivering advanced pre-hospital care to people with a sudden life-threatening injury or illness, saving lives and improving patient outcomes. Each lifesaving mission costs around £2,500-£3,500 and are funded almost entirely by donations.  This great initiative with Virgin Red will help air ambulance charities to save even more lives.”

Air Ambulances UK and Porsche Club Great Britain are proud to announce a fantastic new partnership to raise vital funds in support of the lifesaving work of the UK’s 21 air ambulance charities.

The partnership provides Porsche Club Great Britain and its Members with a great opportunity to find out more about their lifesaving services while also providing exciting ways to get involved and raise funds to help them save more lives.

“We are really proud to be working in partnership with Porsche Club Great Britain and incredibly grateful to Members of the club for your support in raising funds to help ensure more people can benefit from the advanced lifesaving pre-hospital care that air ambulance charities are providing every day across the UK.”

Our partnerships team is confident of offering you a professional, enthusiastic and tailored relationship that ensures working together meets all of your charitable and CSR ambitions. We are skilled at engaging employees at all levels as well as developing more strategic aims relating to leadership, management, communication, teamwork, risk and brand. We will work with you to address your priorities from the partnership, be that customer loyalty, brand engagement, employee engagement or any other need. We do not have a template to follow but what we do have is great experience and expertise to share so that together we can create a partnership that is rewarding in every way.

Every air ambulance lifesaving mission costs on average around £2,500-£3,500. We are committed to growing the number of national fundraising partnerships we have with large organisations, major donors, philanthropists and Trust and Foundations to support this vital work.