Henry Carpenter will be cycling 300 miles in 3 days between the 28th – 30th October, raising money for AAUK after the lifesaving treatment he received in April 2020 from Midlands Air Ambulance Charity.

Henry’s story is very unique, in April 2020 he was taking a tractor out to fetch sheep in during lambing season. After climbing down from the tractor to close a gate behind him, Henry had knocked the gearstick. This resulted in him being knocked and run over by the tractor. A hydraulics box on the back of the tractor used for transporting ewes and lambs scraped up against Henry’s back.

The Midlands Air Ambulance was despatched from the RAF Cosford base, in Shropshire. After arriving on scene, the crew on-board started treating Henry for his injuries which included a fractured pelvis and dislocated hip. Henry had also torn blood vessels in his hip as he had attempted to free himself. 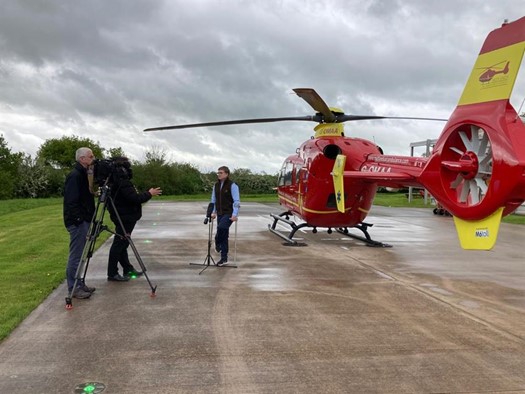 In 2021 Henry won the AAUK Awards of Excellence, Young person of the year for his amazing fundraising efforts for Midlands Air Ambulance Charity, the charity which saved his life following the terrible farming accident. Although Henry survived, his serious injuries meant that he had a long road to recovery which was hampered by COVID, leaving him in agonising pain, discomfort, and low mood. Despite this in February 2021, finding every step incredibly painful, he took on the challenge to walk 54 miles in 30 days. Incredibly he achieved it and managed to raise over £11,400 for the charity.

Henry wanted to take the opportunity to share the importance of teen mental health and his recovery by taking on another challenge. Henry will be cycling the 300 miles from the 28th – 30th October. You can find out more and how to donate here.