Give the Gift of a Lifetime

What you need to know

Leaving a gift in your Will to Air Ambulances UK, no matter how big or small, can make a real difference to the lifesaving work of air ambulances.

Your gift will allow us to continue our work in supporting the UK’s lifesaving air ambulances for generations to come. A gift in your Will costs nothing in your lifetime but will give the gift of a lifetime to someone in urgent need of an air ambulances lifesaving care in local communities across the UK. Whether you want to update an existing Will, or you’re planning to write your first Will, leaving a gift to charity is simple and easy to do. An up-to-date Will ensures your wishes for your loved ones and any charities you support will be clearly understood and honoured.

Why are legacies are so important?

We understand that providing for your loved ones will be your top priority when making a Will but  many people will also choose to leave a gift in their Will to their favourite charities.

What your Gift in Will could fund?

No matter the size of your gift, it will have a vital impact on our work. Your legacy will enable us to continue to support air ambulance charities lifesaving missions by: 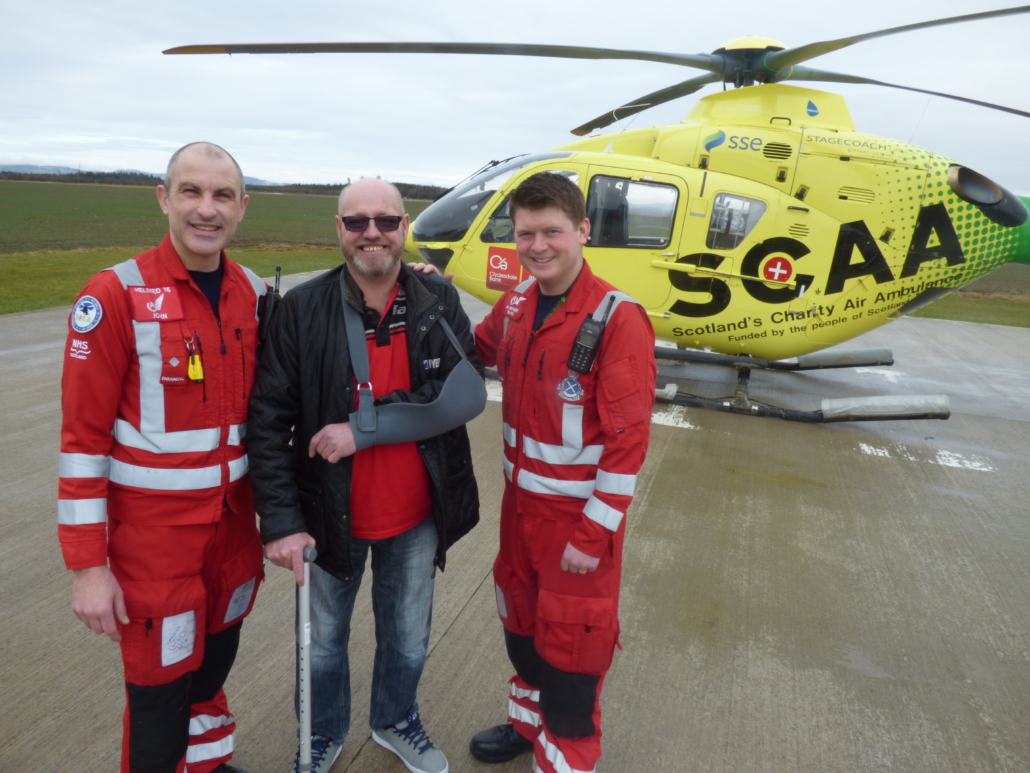 The last thing Jason remembers was turning his motorcycle onto the road outside his Fife home with the intention of heading out for a fish supper.

His memory has blocked out the horror of colliding with a car on a bend in the road minutes later, being catapulted over a 12 ft hedge and landing, smashed and bleeding, in a field 25 ft beyond the impact zone. Scotland’s Charity Air Ambulance were called, Jason had multiple injuries -several of them life-threatening -and the SCAA team quickly stabilised his most serious injuries  and airlifted him to Dundee.

Jason has said “I know I’m lucky to have survived…and the surgeon told me I was lucky to have been airlifted comfortably and quickly or the story might have been very different.  Without them I really believe I wouldn’t be here today – I owe them my life. Having recently become a grandparent for the first time, the little one will get a Grandad thanks to the team at SCAA,”

If you have already chosen to support Air Ambulances UK in your Will, we would love to hear from you so we can say thank you! It is also helpful to let us know as this allows us to plan for the future.

We are incredibly grateful to those who have chosen to support us by leaving a gift in their Will to us.

If you are looking to make a payment from a Will, please contact our Head of Fundraising, Emma Carter on 01564 339958 or email emma.carter@airambulancesuk.org.

If you make the payment using our online donation form, please get in touch to let us know so we can ensure the gift is properly recorded and acknowledged.

When 3-year-old Alfie Farr complained to his parents that he was thirsty, they thought nothing of it however soon after he became unresponsive and lifeless. His Mum Rebecca called 99, and when an ambulance crew arrived things took a turn for the worst after he started to suffer seizures and stopped breathing.

Due to the severity of Alfie’s condition, Great Western Air Ambulance Charity’s (GWAAC) Critical Care Team were called and quickly placed him in an induced coma to minimise the impact on his brain as he had been unconscious for over 45 minutes. Due to the advanced care, he received from the GWAAC team Alfie was able to go home after four days in hospital. He is now a football crazy ten-year-old  who drags his dad out to play at every opportunity! 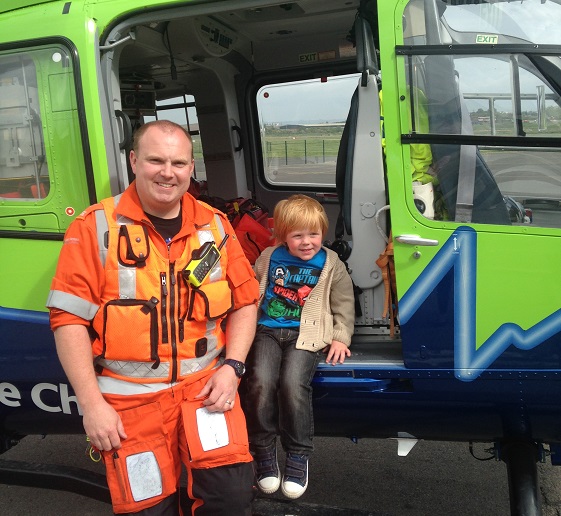 How do I include Air Ambulances UK in my Will?

If you would like to leave a gift in your Will to help the UK’s air ambulances saves lives, we strongly recommend that you speak to a solicitor to ensure that your wishes will be carried out.

You will need to take the following information with you?

Do I have to be wealthy?

Not at all, whatever the size of your gift – large or small – you will be helping air ambulance charities to save lives. Your estate is calculated based on what you have left when you die, if you arrange your gift to Air Ambulances UK as a residuary gift, it will only be paid after all the other gifts you leave to your loved ones have been made.

What types of gifts can I leave?

Pecuniary gifts are gifts of a set amount of money. If you would like a gift of money to keep its value over the years, it is a sensible idea to ask your solicitor to index-link it.

Residuary gifts are gifts that are a percentage of your estate after all other gifts and expenses have been paid. Many people choose to add a percentage of their estate to Air Ambulances as this means our gift remains in proportion to what they want to leave to loved ones.

Specific gifts are things, such as jewellery, a property, or shares.

Your solicitor will be able to explain this in more detail.

Is there suggested wording I should use to leave a gift in my Will?

Your solicitor will be familiar with the wording to use and will be able to advise you on the best wording to use, depending on your wishes.

Are gifts to charity in my Will Inheritance Tax free?

However, the threshold at which inheritance tax kicks in changes from time to time. To ensure you have the most up to date information and understand the tax implications for your estate, you should discuss this with your solicitor who will be able to advise.

Wouldn’t it be better to help now rather than later?

We are grateful for both types of gifts, and many people who leave us a legacy also support us during their lifetime. Others use their Wills to support the UK’s air ambulance charities for the first time.

Do I need to tell AAUK if I’m leaving a gift?

You don’t have to tell us if you decide to leave us a gift in your Will. However, we would love to be able to say thank you, and to keep you informed about our lifesaving work.

You do not need to tell WaterAid if you choose to add a gift in your will. However, we would love to be able to say thank you. Any information you share is completely confidential and we understand that you may change your mind.

What if I change my mind?

How do I change or add to an existing Will

If you want to make a change or an addition to your existing Will, you can usually do this easily with a codicil. But it is very important to use a solicitor to do this to make sure your wishes are honoured properly.

Under no circumstances should you write on an existing Will itself. You should keep any codicil you make with your existing Will but not physically attached to it.

There is enormous support and affection for air ambulance charities right across the UK. It is one of the most recognised, vital and loved national causes that has or will touch the lives of most of our 68M population 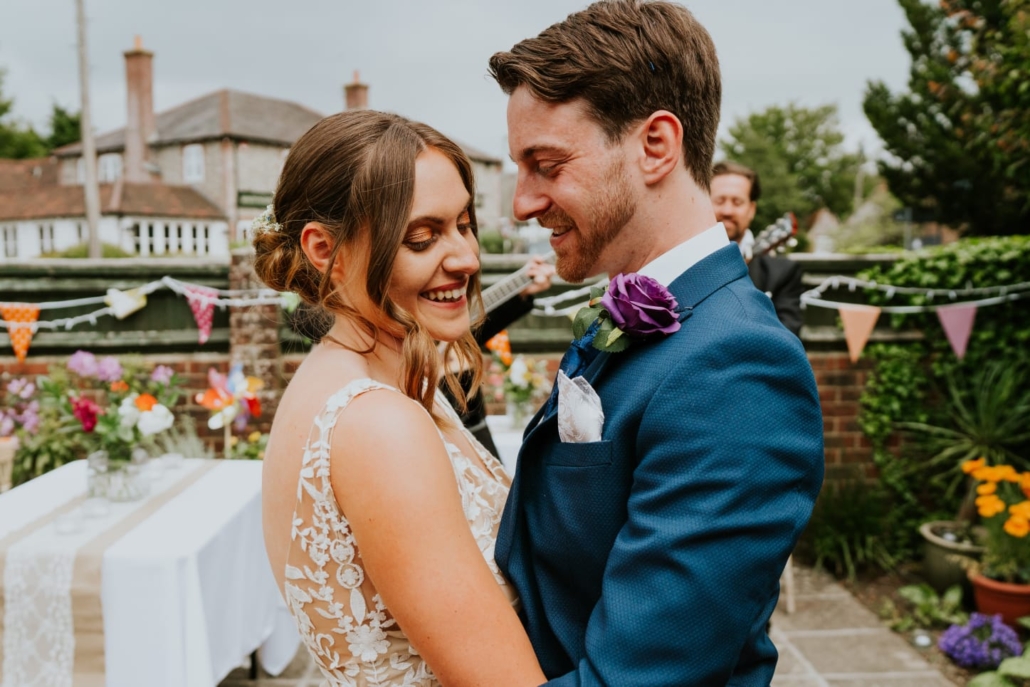 Jogging through the streets of Portsmouth on a cloudy New Year’s morning, 30-year-old Dale was embracing the start of a new year. As he stepped out to cross the road, his life was about to change forever.

“It was probably the first year as an adult I could manage to go jogging on New Year’s Day and not just be hungover. As I stepped out to cross the road, I was hit by an oncoming car.”

Police units and paramedics arrived on scene, quickly followed by the HIOWAA Critical Care Team. Dale was stabilised at the scene and transported to the region’s Major Trauma Centre. Among his injuries were broken bones in his vertebrae, ribs, sternum, scapula and skull, eventually causing two bleeds on the brain, a punctured lung and a bruised liver. “The T12 vertebrae essentially exploded, causing my spinal cord injury, meaning I am now paralysed and have no sensation in the lower half of my body” Dale spent the next 17 days in a coma and a further three weeks in UHS before being transferred to a Spinal Treatment Centre.

When Dale was in hospital that goal was seemingly out of reach, but was determined to walk again.

“They thought I had a complete injury, meaning I wouldn’t get any movement back, but it was only when I started attending private physiotherapy that they found there’s a chance I can get movement back and that I should be able to walk again.”

At his first hydrotherapy session, Dale regained movement in his leg as he pulled his knee up to his chest. With his wedding fast approaching, Dale’s new aim was to stand for the first dance. “We chose Stand by Me by Ben E. King, and we just stood together. It was amazing.”

“It was very slight, but it was movement. It was unbelievable. We chose Stand by Me by Ben E. King, and we just stood together. It was amazing.”

“But without the support and generosity from the public, who knows what might have happened. No one knows who is going to end up needing the Air Ambulance today, tomorrow or the next day. It could be any one of us. And it’s not just myself who is eternally grateful, it’s my friends and family as well. We all just owe them so much.”

William Graham was crushed by a dumper truck at his home in Co Down, Northern Ireland whilst doing maintenance.

William said, “I could feel myself fading and had said goodbye to Emma (my wife) believing I wasn’t going to make it, my last memory after that is hearing the helicopter and help arrive”.

The Air Ambulance Northern Ireland team arrived at William’s home within 12 minutes and carried out advanced pre-hospital care which included placing William in an induced coma as he had significant, life-threatening injuries.

The father of four young children was airlifted to the nearest major trauma centre  where he stayed in intensive care for 7 weeks, due to the extent of his injuries he was intubated for 5 weeks and then spent a further 5 weeks in the surgical ward.

William added: “I owe my life to the service of the Air Ambulance NI and the staff at the RVH and will be eternally grateful. So much of what they do is funded by public donations which undoubtedly has saved countless lives. It really is a most worthy of causes”

Now, almost two years on, William is back to work as an estate agent and welcomed his fifth child, a daughter in July 2021 and he is delighted to still be here for his family. 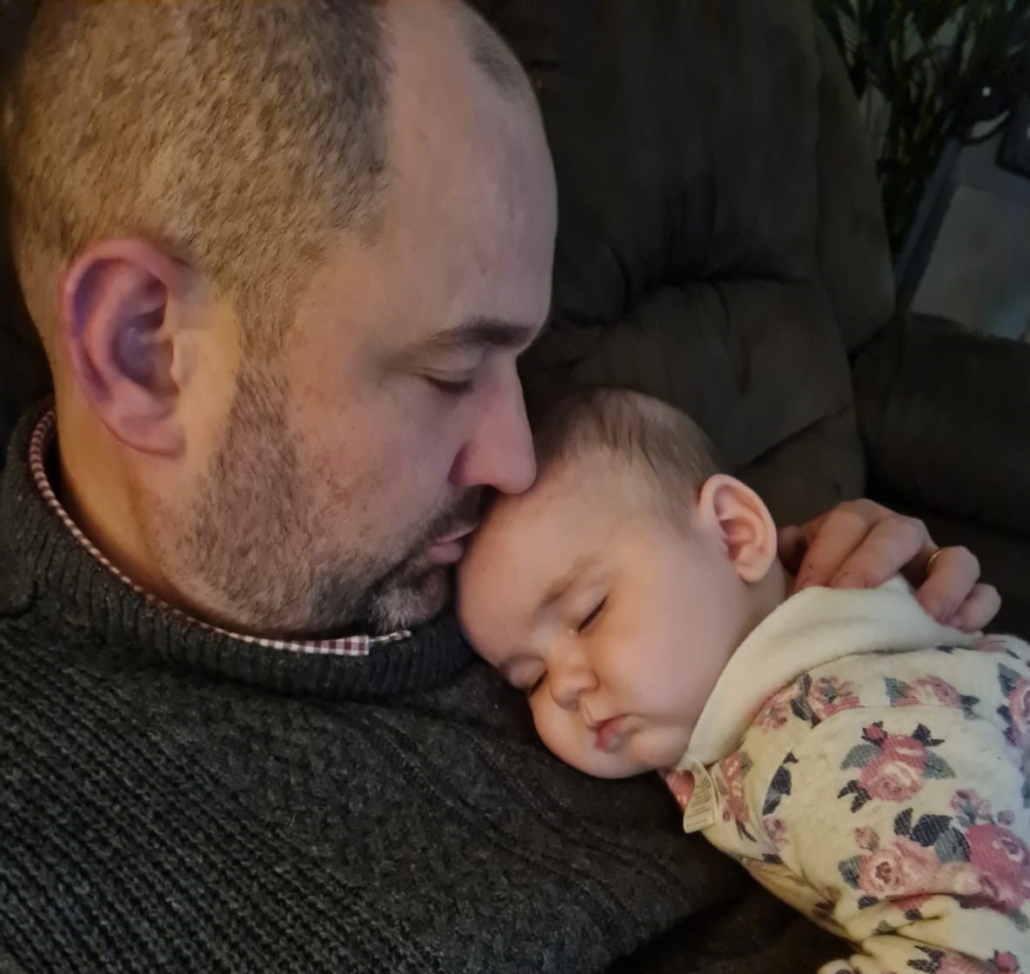 Get in touch with Air Ambulances UK

Get in touch with your local air ambulance charity 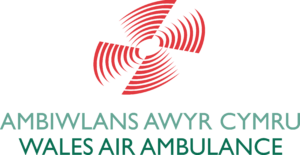 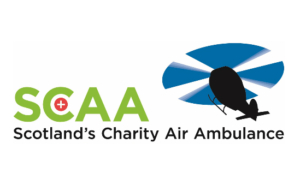 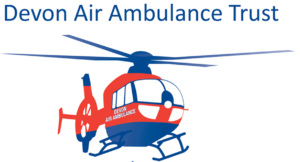 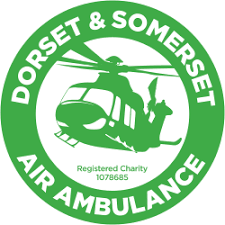