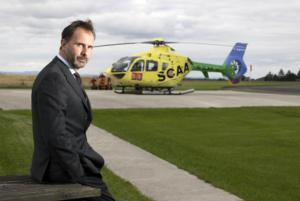 Everyone at Scotland’s Charity Air Ambulance (SCAA) is thrilled to learn that chairman John Bullough has been awarded an MBE in the Queen’s Birthday Honours.

John, who was one of the founding trustees that showed the vision, passion and commitment to launch Scotland’s first and only charity-funded air ambulance service, has been given the honour in recognition of “Services to Emergency Healthcare in Scotland and to the community of Perth”.

Reacting to the announcement, John acknowledged the teams of staff and front-line crew he has worked with over the years.

“I’m deeply honoured to be receiving this award and do so in the full knowledge that I have been lucky enough to work with teams of exceptionally dedicated and talented people.” he said.

“I am indebted to them and they are all worthy of recognition.”

SCAA CEO David Craig was thrilled to learn of the honour for the charity’s chairman.

“Everyone at SCAA is delighted and extremely proud that our Chairman, John Bullough, one of the founding Trustees at SCAA, has been recognised for his tireless work – not just with the air ambulance charity, but in the wider community.

“John continues to be a guiding influence for the charity and his enthusiasm and commitment to helping others drives us all on – it’s a privilege to work with him.”

John has been chairman at SCAA since the charity was formed and the service launched operations in 2013.