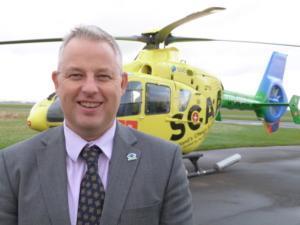 The charity’s boss, who joined SCAA in 2015, is one of seven shortlisted for the Charity Leader of the Year title in the Charity Times Awards 2020. The winner will be revealed at an online ceremony on September 3.

David (46) said he was “delighted and honoured” to be shortlisted for this leading sector recognition.

“It’s very humbling to be judged one of the UK’s outstanding charity leaders,” he said, “but recognising my achievements is a reflection of the excellent work done by everyone at SCAA – charity staff, crew, trustees and volunteers – who have made it such a success in its seven years of service and established us as a vital life-saving component in the country’s emergency response network.”

David, originally from Clydebank and now resident in Livingston, joined SCAA following an impressive career path in the charity sector.

He immediately saw the potential of the fledgling air ambulance charity and – focusing on teamwork, partnership development and hands-on leadership – has helped it flourish and grow into the vital frontline national emergency service it is today, backed by a robust and thriving charity business model.

As CEO, David was charged with leading and delivering the biggest project in the charity’s history – doubling the service with the creation of a second operational airbase complete with helicopter air ambulance and crew which was launched in April 2020.

David lead not only a £6 million capital appeal, but also the sourcing, development and delivery of a new additional operational centre and its many components for the effective doubling of SCAA’s life- saving service.

And all this while sustaining and developing the existing service based at Perth and the charity operation.

“I’m extremely proud of everything SCAA has achieved and the way we continue to resonate with the people of Scotland, who fund our life-saving service entirely,” said David.

The Charity Times Awards, now in their 21st year, celebrate and recognise best practice in the UK charity and not-for-profit sector.

The Charity Times say the Charity Leader of the Year Award “identifies someone who has demonstrated outstanding leadership and management skills in the running of their charity and whose vision is evident throughout the working of the whole of the charity”.