A partnership between Unipart Logistics and Air Ambulances UK has raised over £40,000 to help the nation’s 21 air ambulance charities save even more lives.

The partnership came about as a result of a lifesaving mission to Unipart’s Chief Commercial Officer, Claire Walters, who was critically injured in a cycling accident in Cornwall in 2019.  Claire was in collision with a car while cycling which left her unconscious and critically injured with a collapsed lung, broken ribs, collarbone and vertebra, a dislocated knee and facial injuries.

In November 2019, following a gruelling period of rehabilitation, Claire and a team of colleagues remarkably completed the Thames 100, a four-day 100km walk from the source of the River Thames in Gloucestershire to the Thames Barrier in London in November 2019, raising over £23,000 in the process.

Now, this October, Claire is getting back on her bike to complete an emotional journey to say thank you to the crew who saved her life, and has a team of colleagues joining her on a gruelling three-day challenge to raise essential funds for Air Ambulances UK and have already raised over £17,000.

“It is no exaggeration to say this was a life and death situation. Without the lifesaving mission from Cornwall Air Ambulance so quickly delivering such advanced equipment and care, my situation may have turned out very differently. This year’s challenge will be quite an emotional journey for me, giving me the opportunity to thank the Air Ambulance team who saved my life after my cycling accident in 2019. I’m really pleased and also humbled by the support of all the team who are giving up their time to join the bike ride, and everyone who has supported us with fundraising and sponsorship for Air Ambulances UK.

“I will be forever indebted to the lifesaving work of Cornwall Air Ambulance Trust and hope as many people as possible will support Unipart’s partnership with Air Ambulances UK to help support the critical service all of the UK’s 21 air ambulance charities provide nationwide every day.” Claire Walters

“We are incredibly grateful to the team at Unipart Logistics for undertaking this great challenge to raise funds to support the lifesaving work of air ambulance charities across the UK. The story of Claire’s survival is testament to the advanced lifesaving pre-hospital care that air ambulance charities provide every day, giving people with a sudden life-threatening injury or medical emergency the best chance of survival and patient outcome.”

Air Ambulances UK is the national charity championing, supporting and representing the lifesaving work of the nation’s 21 air ambulance charities, whose crews provide rapid pre-hospital critical care to trauma patients and people with sudden medical emergencies every day across the UK.

It costs in the region of £2,500-£3,500 for every air ambulance mission and, for charities that rely almost entirely on donations, the financial impact of the last 18 months has been really tough.

To support the partnership, please go to: https://justgiving.com/campaign/UnipartLogisticsChallenge2021 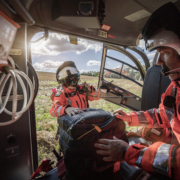 Chris’ survival story thanks to East Anglian Air Ambulance; “I know how close I came to dying”