Wherever you live in the UK, the chances are that you have spotted an air ambulance helicopter in the skies or have seen one attending an incident.

Now, to mark National Air Ambulance Week 2019 Haynes is offering a fascinating insight into the running of these helicopters and the vital role they play in delivering lifesaving care with the launch of a new Air Ambulance Operations Manual, which will also raise vital funds for Air Ambulances UK.

The new manual explores the history of the UK air ambulance charity services and looks into the development of the network and the funding of each charity. Readers can read first-hand accounts from air ambulance crew, along with case studies from some of the patients the crew have treated.

In true Haynes style, the manual features technical diagrams of the Leonardo AW169 helicopter used by a number of air ambulance services, and photographs of each of helicopters used by the various air ambulance charities throughout the country.

Haynes will donate 75p to Air Ambulances UK for every book sold. 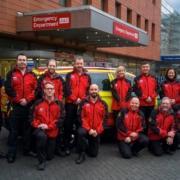 Launch of Golden Hour Give an Hour