To mark Restart A Heart Day on 16th October we are sharing the inspiring story of Duncan Stevenson who suffered a heart attack and died seven times, but survived thanks to the incredible critical care skills of the crew of Scotland’s Charity Air Ambulance.

Duncan suffered a heart attack while walking in remote Highland Perthshire. A land ambulance reached the patient and stabilised him before setting out on the nearly two-hour drive to Ninewells hospital in Dundee in worsening winter road conditions.

With time against them, the ambulance crew requested air support and SCAA was deployed and arranged to rendezvous with them at an approved landing site at Lochearnhead and airlift the patient the rest of the way.

Land and air ambulance crews worked together to transfer the patient to the helicopter, but no sooner was he comfortably settled in than he suffered his first cardiac arrest.

Paramedics used the aircraft defibrillator to shock his heart back to a steady rhythm and – happy that the patient was stabilised but also knowing that time was crucial – the helicopter lifted and started through the harsh winter weather toward the critical cardiac hospital centre at Ninewells.

“Although he was sitting up and talking to us, the patient’s condition did give cause for concern and we set out all the appropriate cardiac life-saving and resuscitation kit we might need ready to act quickly,” explained SCAA Lead Paramedic John Pritchard, who was on crew with Paramedic colleague Richard Garside.

The paramedics’ foresight was to prove prophetic as their patient was to “die” a further six times in mid-flight with the medics fighting for his life every step of the way. Luckily for everyone on board, pilot Shaun Rose had over 8,000 flying hours and 10,000 missions behind him as he called on his significant experience to safely conduct the flight in challenging winter weather conditions.

The crew continued to resuscitate their repeatedly arresting patient, carrying out CPR, airway management and ventilating.

“We were so focussed on our patient that – although we were well aware of the challenges Shaun was facing – we had plenty going on ourselves,” said John.

Their patient Duncan, however, remembers little of the drama unfolding around him.

“I don’t remember much apart from coming to occasionally and experiencing the helicopter and team getting buffeted by the extreme weather,” he said.

Thanks to the expert in-flight care from the paramedics, Duncan was not only alive when the helicopter landed safely at Ninewells, but was also well oxygenated and suffered no brain function issues as a result of his repeated arrests.

He was rushed to the catheter lab for treatment and has since made a full recovery.

“I was in hospital for three days and had a stent inserted to the problematic artery,” said Duncan. “Amazingly, I was sitting up in bed later that first evening piecing together what had happened and thanking my lucky stars that SCAA was there for me.”

His lifesaving team, however, admitted to being physically and mentally drained and required some well-earned “down time” before leaving the hospital.

“It was without a doubt the most difficult flight of my career,” explained former SCAA pilot Captain Shaun Rose. “And I’ve faced many, many challenging situations in the air.

“Afterwards, we just slapped each other on the back, had a hug and then collapsed with a cup of tea. The conditions meant the paramedics were working on a constantly shifting and tilting platform. They were amazing – real pros.”

SCAA’s crew also paid credit to the work of everyone else involved in the chain of survival that day including ambulance crew, police, air traffic control and hospital teams.

But Duncan is in no doubt who played the major part in his survival that day.

“One of the medical team at Ninewells Hospital told me how lucky I was to have been brought in by helicopter as I had arrested several times and needed to get to critical hospital care pretty quickly – a road ambulance in that weather with me constantly arresting would never have made it in time.

“I owe SCAA my life. I don’t think I would have made it without them. When no one else can reach you – they hopefully can. I’m testament to that and their commitment to saving lives even in the most challenging circumstances.”

In recognition of their outstanding skill and commitment, pilot Captain Shaun Rose and paramedics John Pritchard and Richard Garside were nominated for three major awards – The Pride of Scotland Awards, the Daily Record’s Scotland’s Champions Awards 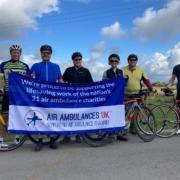